As we shift our focus on to the next iteration product, works on the current version will mostly be bug fixes and maintenance updates. Most feature requests will be forwarded to the next generation.
In response to some quality degradation on breathy voice (often being described under the umbrella term “engine noise”), we have made substantial progress on the algorithm but the updates will not be released until the next generation due to compatibility requirements.

[Sept. 4, 2019] We found a mistake in the macOS package configuration that causes the editor unable to load Chinese voices. The repackaged macOS version has been uploaded. Please redownload.

Like everyone, I don’t like chirps and glitches so cool!
Can someone explain to me was a voiced vocal and a unvoiced vocal is?

Voiced/unvoiced indicates whether the vocal folds are oscillating or not.

Which database have you installed?

The ones from Quadimension: Chiyu, Shian, Cangqiong

Segmentation fault on linux when selecting audio device if set the gui scaling to a number less than 0.7.

(Note: I’m a beginner to Linux, so I don’t know if my problems are “user error” or an actual bug with the software…)
I still have trouble trying to run Synth V on Linux (Mint). It doesn’t recognize the file at all unless I open it using a weird workaround.
When the editor does eventually run, I have the same voice database error message as henrymelt, but with Eleanor, Genbu and Renri…

Hi I’m sorry for asking, but I have a problem with running SynthV (especially the newest build) on Linux Mint. The problem seems to be that “SynthV” get interpreted as an “application/xsharedlib”. (The make the file executable is checked in the permissions tab) I’m new to Linux and in the previous build (014) I found out that adding the .sh after the name on the “synthesizer-v-editor” lets you run it (double clicking on it). However this method does not work with the newest build. I’m reall…


This is sort of a mega thread, I’m sure you can find a solution here, or try asking around and I’ll (or someone else) will try to help (because I’m running the newest synthV build on Linux mint)
kitty September 23, 2019, 6:10am #16

@Lifeline
I’m able to run Synth V using a launcher, but I still don’t know what to do about the database errors. I’ve even re-downloaded the voices in case it was corrupted, but no difference.

huh, did uou locate them in the right area? What kind of an error are you getting?

I put them in the database folder. Each voice gives me the same error. 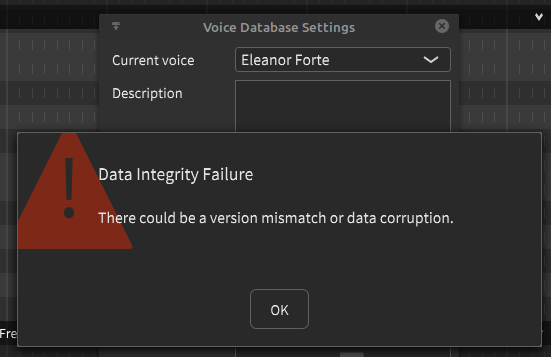 Have you also copied the files under registration/?

Ah, no I have not! My problem is solved, thank you!