Playback freezes at the same point

Hi! I’ve been trying to render my project but whenever I try to playback the vocal audio it keeps pausing at a certain point and the playback freezes from there. I have to restart the program everytime and everytime it would still freeze at the same point. I tried to render the audio regardless and it keeps saying pending so I don’t know what to do. Any help would be appreciated! 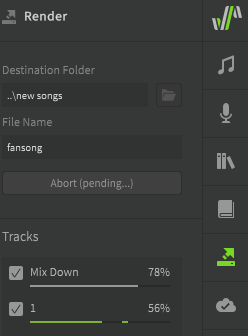 I’ve found that occasionally SynthV gets stuck for no obvious reasons.

I’ve had exactly this issue - SynthV would stop playing a file at some point, and there was no obvious issue with it. Closing and restarting SynthV wouldn’t fix it. The file would simply stop at that point.

I was able to resolve it by changing the VoiceBank, and then changing it back again.

I’ve found that this will often be enough to get rid of the occasional glitch in SynthV, as it appears to make it rebuild the internal structure without whatever issue it was having.