++ shifts all the phonemes to the new note, if there are only 2 notes. Is this expected behavior?

So I’ve had this problem for a while, but I’m posting it here for posterities sake.

I found out about the “++” special phoneme a while ago, and i thought to test it in a variety of conditions. It generally works with 3+ notes: on the note with “++” the word linked to the note is completed. But weird things happen with 2 notes, namely this:

all the phonemes have shifted to the second note, leaving the first note as a silence. I find this behavior odd, and not really intuitive, so I’d just want an official “yes, this is how it’s supposed to work.” or “no, that’s a bug.”
3 notes version, which works as I expected:

Addtional note: Did some experimenting, and found that ++ shifts all the syllables it voices to the last instance of it, so for example:

Is this also expected?

This is my expected behavior, except I wouldn’t expect to have to use - between the notes to get the behavior: 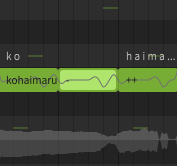 ++ is intended to be used in conjunction with - or + in order to complete a word when multiple phonemes are remaining.

You can accomplish this with kohaimaru- / ++

In your example where you expect ko / hii this makes no sense. That’s the purpose of +, not ++. The correct input would be kohii / +. Technically you could also do kohii- / ++, but there is no reason to do that and while it accomplishes the same result I would consider it bad practice.

Similarly, ++ / ++ does not make sense. If ++ indicates to complete a word you cannot use it twice within the same word.

kohii in particular might not make sense, so a better example would be something like tomoe, but the “tomoe- / ++” is what I’m looking for, thanks!

One correction on my part, while the kohii example doesn’t change the phoneme timing, I neglected to select an actual voice for my screenshots. The dynamics do change slightly to reflect the long イー rather than simply holding the same phoneme longer.

Thank you for taking the time to answer this, this has been one of my pet peeves, but now I know how to do the thing.

Hmm, this broke, I wish there was more documentation… 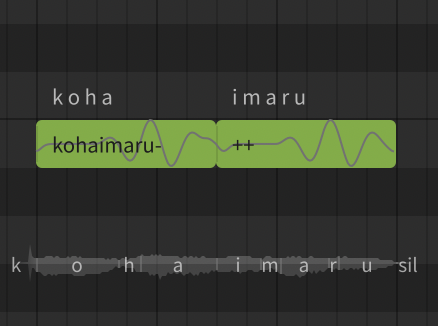