The funding goal is ~37k USD, with ~5.7k USD to go. For international backers who want to avoid shipping costs, reward option “F” is the digital voice only and costs ~117USD. 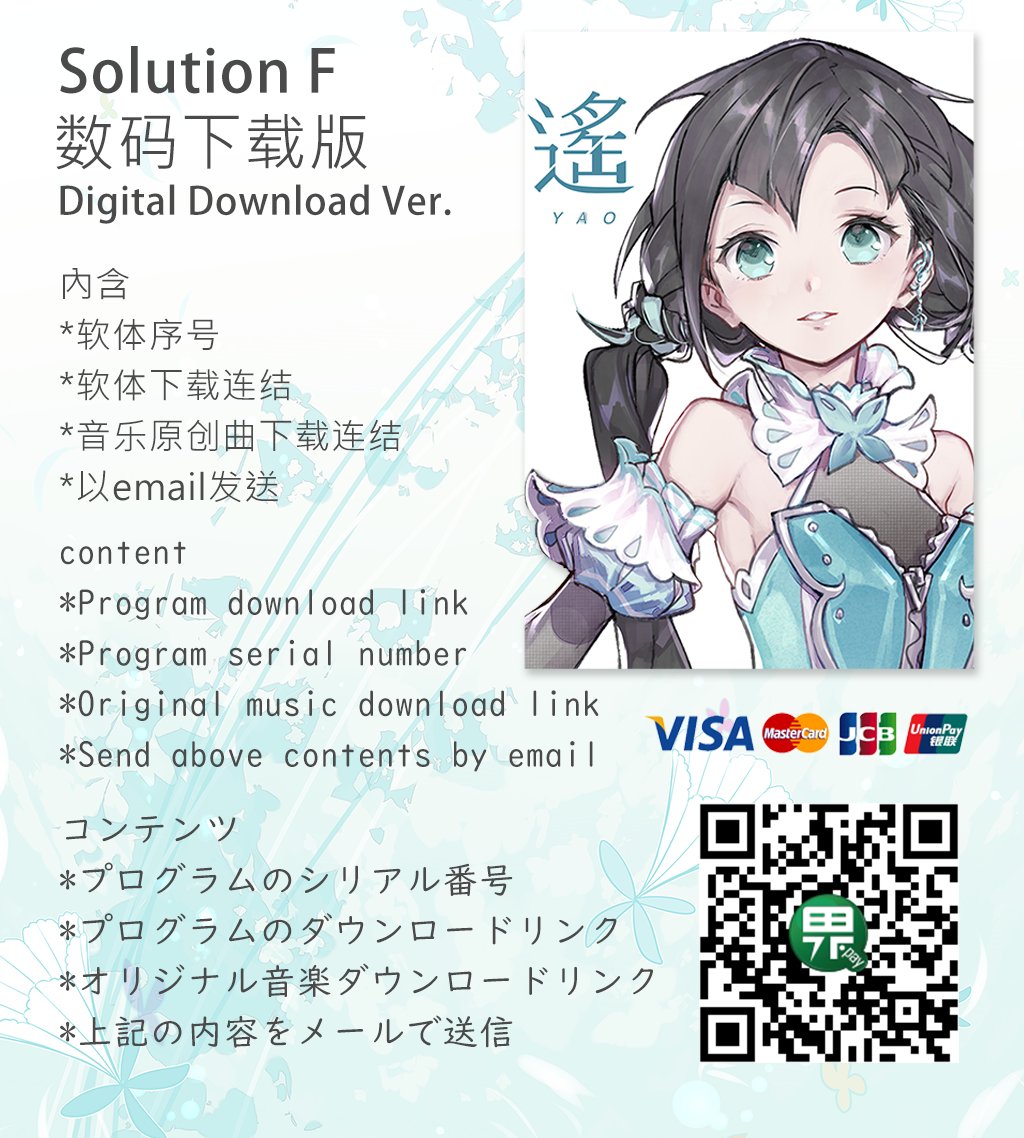 I’m super excited for her AI! If anyone deserves to move on beyond UTAU, Yuyao is definitely one of them

It looks like the funding target has been reduced, which means the campaign is less than 1500USD from reaching its goal:

@YuyaoOfficial
We have received many comments from overseas. They really want to see the completion of the "Xia Yuyao AI Voice Bank", which makes us feel inspired. After internal discussions, we decided to revise the target amount of crowdfunding down to NTD 1,000,000! flyingv.cc/projects/31995 https://t.co/Ec94Q52HGc 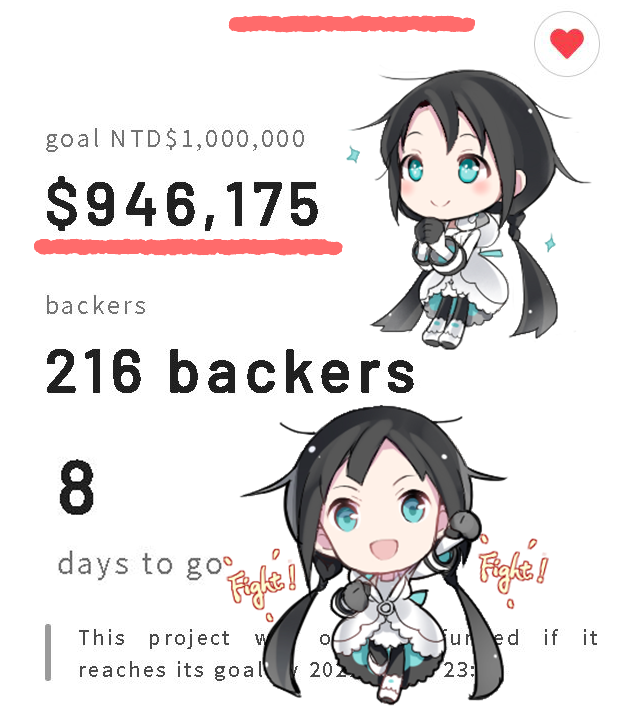 Additionally, a PayPal option has been added (digital voice “option F” only) for people who can’t contribute with a credit card. Gathering additional funds from outside the crowdfund campaign is likely part of what allowed them to reduce the funding target.

@YuyaoOfficial
f you want to join the crowdfunding via PayPal, you can access the following link to sponsor the solution F : paypal.me/voicemith?coun… The cost is NTD$3600, and it includes PayPal handling fee 2.5%. twitter.com/YuyaoOfficial/…

Annnnd a big congrats for hitting the goal~! One week to go before it ends! 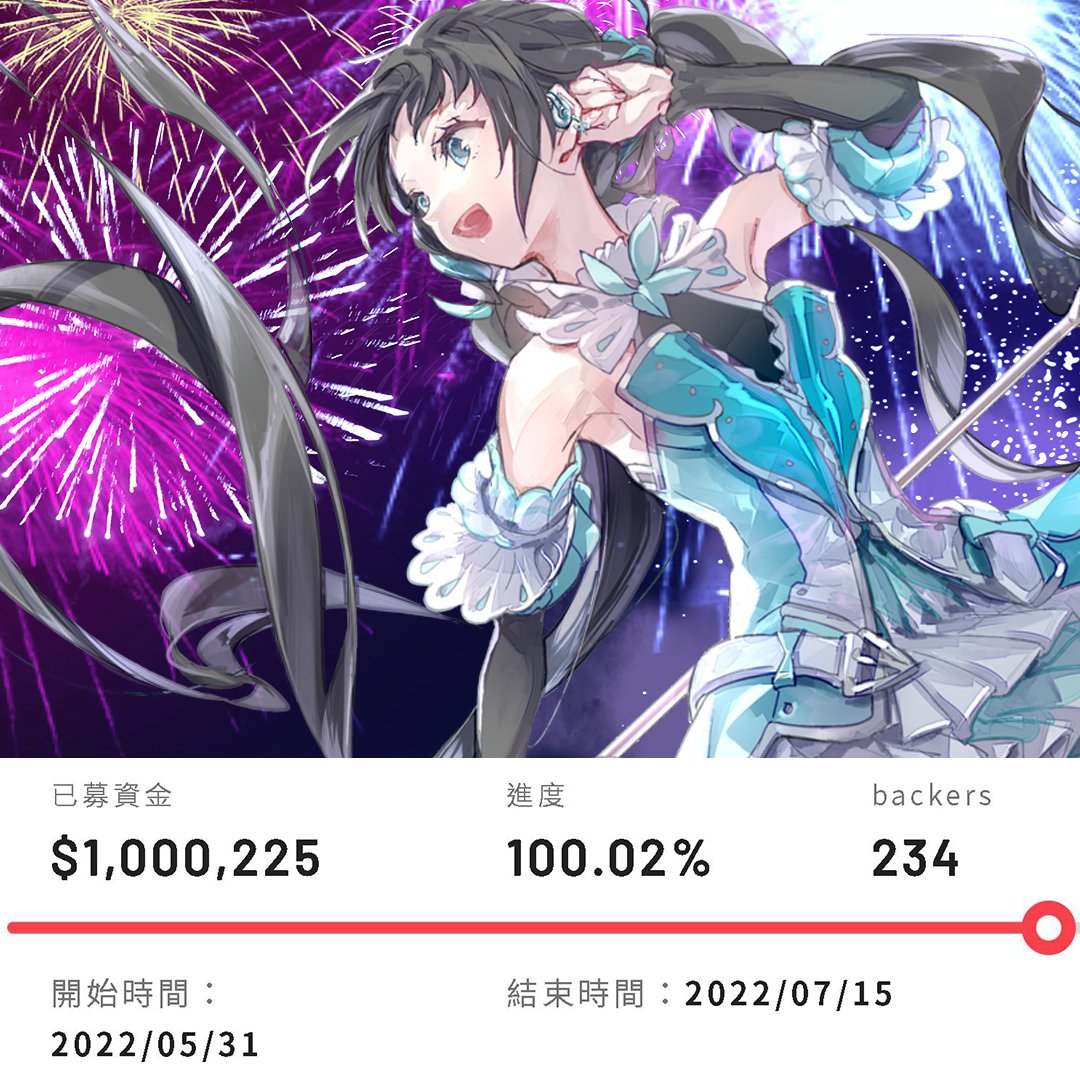 Is there a sample anywhere of her English ability, I have failed to find anything, either this voicebank or any previous incarnations.

Her existing voice is for UTAU and therefore does not have cross-lingual capabilities.

not unless u try hard enough

Her AI voicebank has yet to be produced or, if it was started at all, hasn’t been shown. You would have to look for her UTAU examples featuring her Mandarin and Japanese banks. Any other language was done using those two voicebanks.

Considering the FAQ, it seems they are planning to make the default language Mandarin, while Japanese and English would be done via Crosslingual. She would not be getting a dedicated Japanese bank this time.

OK, the product isn’t finished but they must have some idea that it can/will be done and I would not be suprised if they have a proof of concept in a dark corner somewhere ??
I like what I can find, I have a project I think would suit her range but can I trust her with lead vocals in English? An Xiao (paid v101) has too much accent to sing lead for me, maybe I am just expecting too much from the cross-ling.

Just my two pennys’ worth, that’s all.

they must have some idea that it can/will be done

I’m not quite sure what you mean by this. Any voice can be used to make an AI voicebank, there is no “proof-of-concept” to be done.

Additionally, due to the nature of AI there’s no way to know exactly how robust her cross-lingual synthesis capabilities will be. If that’s a priority for you then of course you should only purchase native-English voices or finished products that fit your purposes, but it’s not something that can be demonstrated until the product is near completion.

Having a rough demo voice might be neat but also potentially more misleading than helpful, since there’s no guarantee that the final result will align with whatever expectations people might glean from it. We already know her vocal tone and that the native language will be Chinese, that’s enough for me. If it’s not enough for you then you lose nothing by waiting for the completed product.

Adding to this, not every company is obligated to show off crosslingual in demonstration. Seika, Ryo, Mo Chen, An Xiao, and Feng Yi did not. Karin did, but they mistakingly used her Japanese when trying to demonstrate Mandarin and didn’t replay it with Mandarin settings and continued on with the stream, so she ended up not having a proper Mandarin demonstration.

The entire point of crosslingual is to make these vocals an option for those languages. Dreamtonics, when introducing the function, said that it is supposed to make the voice fluent in all 3 languages. This benefits everyone who wanted the voice in a specific language but either don’t want to force tune it via phonemes (for tuners), as well as voice providers/companies who were not comfortable producing a voicebank in languages they were not familiar with.

I want to strongly point out that “fluent” does not mean “without accents”. That is something I really disliked when people were putting down “non-native language voicebanks” (Macne Nana English, Meiko English, Luo Tianyi Japanese, etc) and to be honest, when talking about people in real life (especially the latter is rude. People work very hard to learn as much as they can just to communicate in a language they are not native in). It was never promised that the vocals will sing “like a native”, just that they can sing in those languages fluidly and to make it possible for them to do it without having to record those specific languages. I don’t expect Kevin to have “accent-less” Chinese or Japanese. He sounds like an English vocal singing Japanese and Chinese in an American accent. Karin sounds and is a Japanese vocal singing in English and Chinese with a Japanese accent. And in OP’s case, An Xiao sounds like a Chinese vocal singing in English and Japanese with a Chinese accent. And unless they have more data in the other languages aside from default to improve the vocal even further (like Xingchen, and from what was announced, Weina), the accents /might/ be more prominent the less data it has. And to be honest, some people find accents very charming and just want the vocal to be able to sing it in the language they want, accent or not.

Honestly, considering how often I’ve seen comments asking for Utatane Piko English and Gackpoid English/Chinese all those years ago on Vocaloid Wiki and other places, this feature is basically an answer to this kind of request. It even happened for SOLARIA when one of the FAQ was about her getting a Japanese voice database and Eclipsed Sounds said that they couldn’t because Emma Rowley didn’t know the language well enough to produce a quality bank.

For Yuyao, it wouldn’t be unreasonable to expect a Taiwanese accent across all three languages.

Long story short, you buy a vocal built for a specific language and that’s what you get. They’re going to be accented in the other languages. They’re not always going to be “perfect”. If you’re not willing to work with the accent, the vocal probably isn’t for you unfortunately.